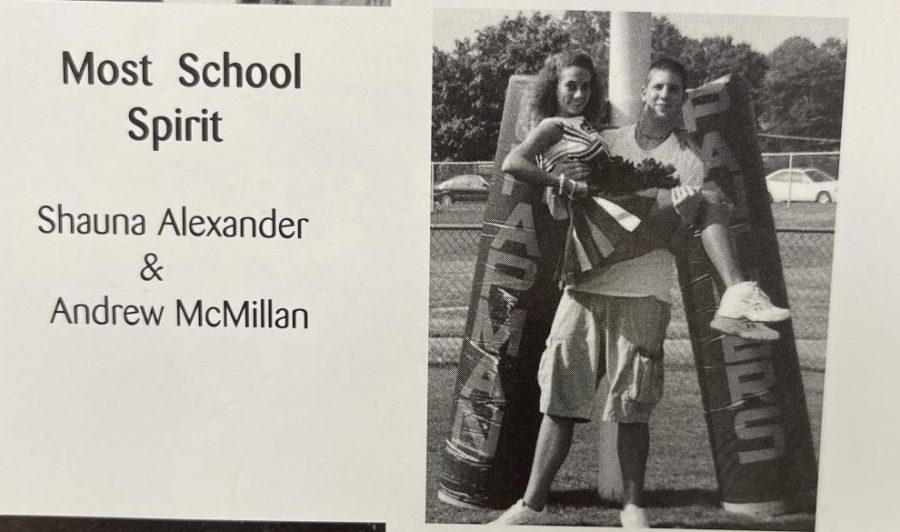 From Most School Spirit to principal, Andrew McMillan has always been a Panther at heart. A 2001 graduate of Chapman, McMillan became principal in 2018.

Being a graduate of Chapman High School is an honor that you will carry with you for the rest of your life.

Being a faculty member at Chapman High School is an honor that you will proudly share with anyone who asks.

This year, 15 faculty members can proudly say that not only do they work at Chapman, but they also had the privilege of graduating here.

Assistant Principal Ricky Pace, a member of the Chapman class of 1985, says that his positive experience as a Panther is what made him decide to come back, first as a teacher and coach, then as an administrator.

“I always wanted to come back to my home school and be a part of what I experienced when I was in high school,” Pace said.

Jason Settle and Jonathan Rollins, members of the classes of 1994 and 1992, respectively, were able to coach at Chapman and other District One schools while in college.

Both emphasized that the Panther community brought them back home.

“I decided to come back to Chapman because this was home,” Settle said. “I grew up here and loved it. It was a no-brainer for me to come back.”

Many of the faculty here who are also graduates add that they have been inspired by their former teachers and enjoy teaching alongside them.

“I really enjoy the fact that I have known many of my fellow colleagues and administrators for years,” said graduate of 1994 Amanda Coates. “We have either grown up in and/or have raised our own families in the same community.”

Chelsi Lowe graduated in 2006 and was part of the last Chapman class to graduate from the building that is now Mabry Middle School. She pointed to former Spanish teacher Sandra McClure and the small-school feel when asked why she wanted to teach at her alma mater.

“I got to teach with Mrs. McClure, who taught me, and I loved going to school here,” Lowe said. “I knew that it was the right-size school for me.”

Adela Trejo, class of 2003, also said that McClure inspired her to teach, along with then biology teacher Amy Driggers and English teacher Alex Hollis. Those teachers helped her when she was a new student from Mexico, and their kindness led her to become a teacher herself.

“When I got here, I was learning English, and they were actually helping me to learn,” Trejo said. “I felt like they cared about me, so that’s what inspired me (to teach).”

Steven Fusaro, another member of the class of 2003, had a special opportunity to return to Chapman.

“One of my former coaches was the principal at the time, and there was a job opening as a teacher’s assistant,” Fusaro said. “He thought that God had called him to reach out to me about the position, and it opened my eyes about the possibility of teaching.”

Many of Chapman’s faculty and staff describe the feeling of returning to your alma mater as coming home.  1986 graduate Susan Hall describes Chapman as not only her home, but also as a part of her.

“It’s hard to explain,” said Hall. “It’s just really special. Every win is your win, and every tragedy is your tragedy.”

As a first year teacher and 2017 Chapman graduate, Kimberly Ensley has experienced this feeling with a set of fresh eyes. “I’ve loved teaching alongside some of the teachers I had when I was at Chapman,” Ensley said. “I’ve had the experience of being in their classroom as a student, and now I get to know them as professionals and learn from them as an educator.”

Principal and 2001 graduate Andrew McMillan says that one of his favorite memories of his time as a Chapman student was the rather unique prom experience he and his fellow classmates were able to have.

“My senior year prom was in Westgate Mall, so that was kind of cool,” McMillan said. “They shut down the whole mall, and we came in on one of the side entrances. Back then, that was a huge deal.”

However, he also enjoyed the smaller moments of high school life, just like students do now.

“I really enjoyed high school,” McMillan said. “(I enjoyed) the parades, the senior stuff, the pep rallies and games, just the same stuff that kids like nowadays. The group that I was with, we had a lot of fun. We were always at games, and we had a lot of school spirit.”

“I have a lot of good memories from here because I enjoyed school,” Fain said.

“(My favorite memories would be) all of the pep rallies and Friday football games because we had great school spirit,” Hopkins said.

Despite the unique situation that comes with working at your alma mater, all of the graduates who were asked if they would recommend working at the school they graduated from said yes.

Nurse Pam Tolleson, class of 1988, says that the Chapman workplace is what makes being there enjoyable.

Lowe pointed to the feeling of coming home as her reason for recommending future teachers to return to their alma maters, but she also recognized the importance of knowing the school spirit.

“It’s kind of like coming back home,” Lowe said. “ You know some of the people, and you understand what the school spirit is all about because you experienced it when you were there.”

Drew Sloan, class of 2007, and Rollins offered slightly different perspectives on teaching at your alma mater. Both agreed that while you might want to wait a few years to return, your alma mater is special to you, and having graduated there will make your teaching experience special too.

“It’s very unique teaching at your alma mater,” Sloan said. “I do recommend it, but maybe after a couple years of teaching somewhere else because there could still be students that you knew when you were there.”

“I think it’s more difficult when you get out of college just because sometimes if you’re at the high school, you can be coming back and working with people who are really close to your age,” Rollins said. “But I also think it’s really good if you can come back because I think it means more to you; that’s the community you grew up in, and you want to see the kids in that community be successful.”

So if you are thinking about becoming a teacher, don’t forget about Chapman when submitting your applications.

According to 2009 graduate Leslie Boyd, this school will always be a part of who you are, and this school is a place where you can be an inspiration to the next generation.

“The amount of passion and love that you can have for the place that helped groom you into the person you are is unmatched,” Boyd said. “I wanted (students) who looked like me and (students) that didn’t to be inspired by a little ole girl from Inman. I love being home, and I can’t imagine teaching and coaching anywhere else.”